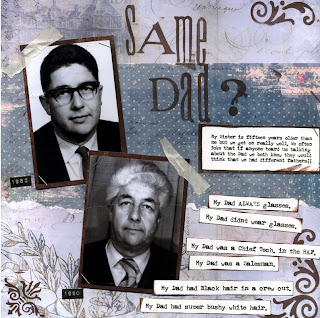 Here's to all the Dads out there past, present and future wishing you all much love!
See our celebration of Fatherhood at Collectively Yours.
Posted by Unknown at 7:39 pm 2 comments: Links to this post 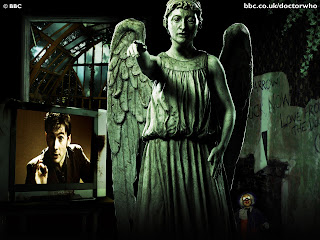 Well this may have been a Doctor-lite episode but we LOVED IT!!!
'Weeping Angels' scared the flippin' pants off us all!!! The idea of statues coming to life and diappearing peeps to the past was fantastic. I admit a soft spot for time travel stories- loved them from Star Trek TNG. It was brilliantly handled by Stephen Moffat in Doctor Who (who interestingly also wrote the other VERY scarey Who episode 'The Empty Child' and 'The Doctor Dances')
The episode didn't suffer for lack of the Doctor or Martha but then neither did the last series' episode 'Monsters and Angels' (Angels again??!!!) the casting was brilliant and I guess strong leads as well as great stort lines are the key to preventing the episode fropm suffering from lack of the effervescent David Tennant!
Sally Sparrow was a lovely character beautifully and deftly protrayed- she was a real'do-er' in the story moving the action along and using her brain, doing a lot of the work for the Doctor!
I chortled at the Doctor's explanation of the complexities of Time- a 'bubble full of Timey Wimey stuff' was a class line and is oft repeated in our Old Oak Tree!!
Oh BILLY!!! What can I say except poor Billy- he was there for such a short time but played with such extrovert fun that we loved him immediately and felt crushed at what happened- there were tears 'when the rain ended' *sniffs*
Larry was a lovely comedic foil for Sally's 'up and at 'em' but not a fool that you had no sympathy with. We all cheered for Sally and Larry but the montage at the end with the statues was a GREAT creepy ending that had us all looking over our shoulders!!

So there has been much standing still with hands over eyes here in the Tree to creep sisters and brothers out *snicker* ahhhh the joys of scarey Doctor Who episodes!!
Still We're nearly the end of the series *eek* only three episodes to go and Captain Jack is back on Saturday hooray but watch out Martha!!
Posted by Unknown at 11:41 am No comments: Links to this post 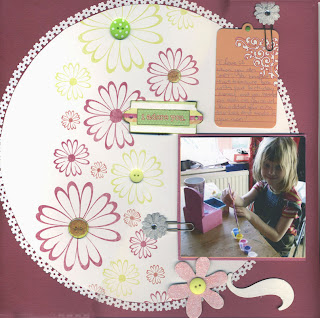 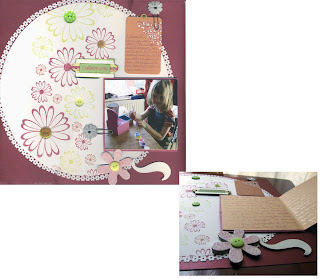 You don't ALWAYS want your your journalling to be on show- maybe you're shy, maybe it's personal but whatever the reason you can always use the hidden journalling method.
There are many different ways of hiding your writing the easiest is probably using a tag which can be tucked behind your photo.
Go to Collectively Yours to see LOTS of ideas for keeping things a secret!!!

Patterned Paper and embellishments from May's ScrapaGoGo Kit
Posted by Unknown at 7:30 pm 1 comment: Links to this post

Some Corkers from Nige!!!

Waving your arms around and talking bollocks.

Sitting round in a group, discussing why a deadline was missed or a project failed, and who was responsible.

A manager, who flies in, makes a lot of noise, craps on everything, and then leaves.

The process by which people seem to absorb success and advancement by sucking up to the boss rather than working hard.

The experience of spending an entire day swimming upstream only to get screwed and die.

One who has bleached/dyed her hair but still has a 'black box'.

The fine art of whacking the crap out of an electronic device to get it to work again.

Entering a fast food restaurant with no intention of buying food, you're just going to the bog. If challenged by a pimply staff member, your declaration to them that you'll buy their food afterwards is known as a McShit with Lies.

Similar to a French Kiss, but given down under.

A very short skirt, only an inch from the hare.

The contents of a Wonderbra, i.e. extremely impressive when viewed from the outside, but there's actually naught in there worth seeing.

A woman whose knickers are too small for her, so she looks like she's got 4 buttocks.
Posted by Unknown at 10:26 am 1 comment: Links to this post

I don't know what happened but after a restless day I overcame my fear and aversion to exercise and went to the pool to join the other ladies of Middlesham for a swim!! I have not swum for about 9 years but I remembered how to do it!! "DH" had said it was 'like riding a bike' and I'd be fine! I pointed out I hadn't ridden a bike since I was seventeen and did that entail the possibility of drowning??!! I always was and probably always will be a sarki mare!!
I swam lengths for 30mins and really enjoyed myself. It was interesting being with just ladies- as there was no racing or competitiveness of any type! Sedate lengths with conversation-rather nice really! My fave thing strangely enough was floating on my back in the deep end-I must have looked a loon with a goofy grin on my face- but it felt so otherworldly somehow!!

My aversion to exercise has come from 2 things- asthma and my hot thing! I always struggled to breathe and any exercise would just reduce me to a wheeze, frightening and not conducive to prancing around!! However our new Doc put me on magical TURBOHALER (superhero music) which has reduced my asthma to 'not there' status except if I have a cold- so that's COOL!
The second is genetic. I think my body embraces the Irishness of my genetics a little too enthusiastically at times. I look like an upside down pint of Guinness for starters! Then there's the fact I cannot cope with any temp about about 21degrees centigrade without breaking out into huge sweats accommpanied by a beet red face *sigh*
I remember when i was 16 or so going to play badminton with my Mum. I was very fit then and was able to play happily for an hour or so. However the LOOK of me would have made yu think I was a heart attack victim- sweating madly, BRIGHT red face- whereas my Ma (who was a lady of 50plus) was as fresh as a daisy!!

So I hate this getting hot thing- I mean I HATE it- It's embarrassing and I feel awful as it takes me an age to cool down! So swimming seemed perfect- who sweats with swimming??
I DO!!!!!
I was getting dried off and it started *rolleyes*
I perspired copiously all the way home and my face felt like it was BURNING with heat!!
Still I slumped during 'Hustle' and eventually cooled off and went for a shower!!
WHAT am I like???!!! *grin*

Still I REALLY loved the feeling of swimming and will go again!
Posted by Unknown at 10:07 am No comments: Links to this post 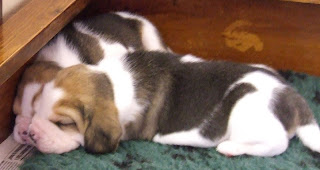 As an extra special birthday treat we decided to go and visit the puppies! Moma Beagle adored 'DH' and sat in front of him for ages lapping up ear tickles!! This was a Beagle that was supposed to be a bit funny with chaps at the mo!! 'DH' was a big hit though!! The pups were roly-poly bellies with ickle leggies! They did a lot of snoozing then some slurping then some widdling (getting house trained already!) and then after some rolling a bit more snozzing!
It was realy lovely to see the pups with Mama made having one of the girls more real. We were lucky to aquire a crate from the breeder so we can make a snuggly den when pups comes home in 5 weeks!! I see life having some big chages ahead for us!! COOL!
Posted by Unknown at 10:02 am No comments: Links to this post

Love this fabby and inspirational site 'It's a Creative World'
Congrats to Andrea, Joy, Cath, Caz, Maria, Jo and Trish- superb tips, ideas, scrummy things a real FEAST for the creative senses!!!
The pimped shed is just TOOOOOOOOO cute!
Posted by Unknown at 9:22 am 1 comment: Links to this post

If you are feeling a little lacking in the Mojo Department then why not tootle over to Mojo Holder? There Mel, Kelly and Dougie will challenge you to a scraplift from the UKScrappers gallery. It's a great way to a) jump start your creative juices b) to try something new c) get scrapping again!
Have fun!!!
Posted by Unknown at 7:45 pm No comments: Links to this post 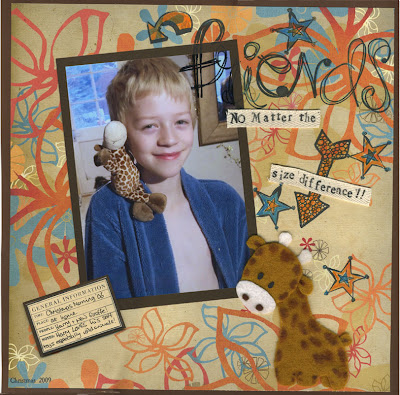 To be honest I was REALLY looking forward to this Dare- I think I had it planned in my head ages ago!! I've loved making my felt mascots from my Japanese Book and this Giraffe just HAD to go with this piccie of 'The Blonde One' with his friend on Christmas morning!!! He loves his soft toys and I love any excuse to buy them!! 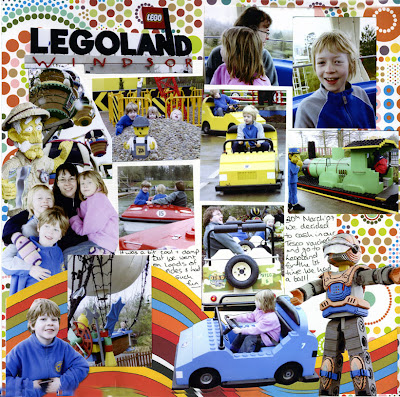 The challenge this week was to produce a multiphoto layout. Our trip to LegoLand was great fun and we had a fab time despite the rain (true Brit stiff and damp upper lip!!)
There are 15 photos on this layout!! Most were printed in 2.5" x 3.5" format and a few were slightly larger and were cut out to add variety and get away from too many rectangles!
Then the photos were collaged onto the layout. I found it easier to move them around until I liked the placement and then lift each one and stick it down.
Posted by Unknown at 7:24 pm 1 comment: Links to this post 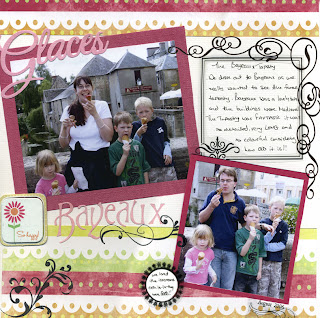 At LAST!!! Played with my May ScrapaGoGo Kit
and very appropriate it was to!! Upsy Daisy Ice Cream Shoppe papers for piccies of us the MOST delicious ice-creams in Bayeaux...That Tapestry was good too!!!!!